Autosomal dominant genetic conditions that of the two genes, alleles, passed from parents during fertilization, only one parent, either male or femele, needs to carry the mutation for the condition to pass the condition to the child.

The mutation can pass during reproduction at fertilization of either; 1) germ line the ovum by the sperm, one parent has the condition, or 2) later in embryonic development. If NF2 started a few cell division growth during fetal instead of at fertilization development, will determine how many cells of the body will have damaged NF cells. The point of NF2 development determines how much of the body is at risk of NF; left side, right side, arms, legs, chest, spine or brain. Later cellular development of NF2 could be in the part of the body the mutation would not have had issues, and this is often why their children may have NF in every cell, while the parent has no NF issues.

There are three forms of NF; NF1, NF2, and NF3 also known as Schwannomatosis or SWN.

Genes can be found on different chromosomes in the body are specifically for tumor growth blockers, in the case of people with NF2, if the missing NF2 gene results in the development of the protein called MERLIN. Unfortunately, MERLIN also results in more than tumor growth. When the body develops MERLIN, it is unable to prevent tumor growth which results in different combinations of tumors and locations in different parts of the body. While exposure to items that can cause increased growth of tumors of certain types, and in certain locations in the body, tumors will grow regardless of environmental variables like food or toxins.

If an individual has a mutation with the possibility of; Bilateral Vestibular Schwannoma, Spinal-cord Schwannoma, and brain Meningioma, but developed the NF2 condition late in fetal development, they could potentially only grow Bilateral Vestibular Schwannoma. Where children they may eventually have would be at risk of tumor formation in all the three regions their parent did not, at either the same or faster rate of growth and possibly earlier in life.

NF2 is an autosomal dominant condition when inherited from family members, Germ Line. However, NF2 can also occur as a new, Spontaneous Mutation. 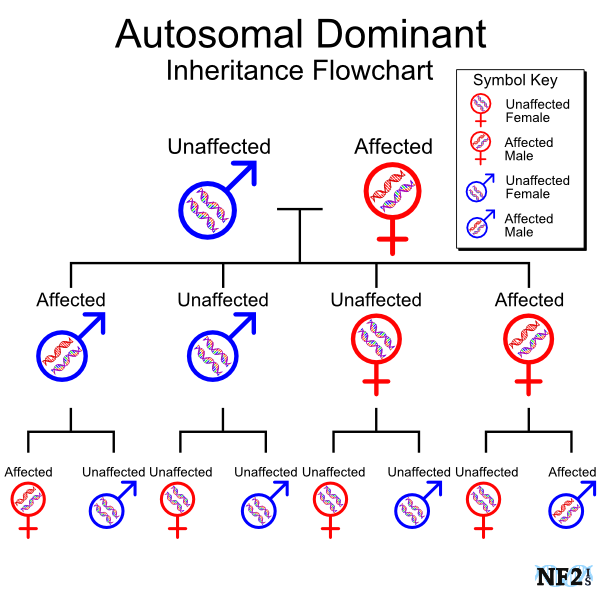 An autosomal dominant genetic condition can be passed down through families. This method of inheritance does not "skip" generations. If a condition is inherited as the result of Autosomal Dominance, it means an individual only need to get the gene from one parent, if a parent has an autosomal dominant condition.

The inheritance of a condition, disorder or trait depends on two main things, the type of chromosome it's on and the kind of trait it is. The trait could be a gene on one of the first 22 chromosomes called autosomal or on a sex chromosome, X or Y, the 23rd chromosome. The second thing the inheritance depends on is the type of trait, a dominant or recessive one. 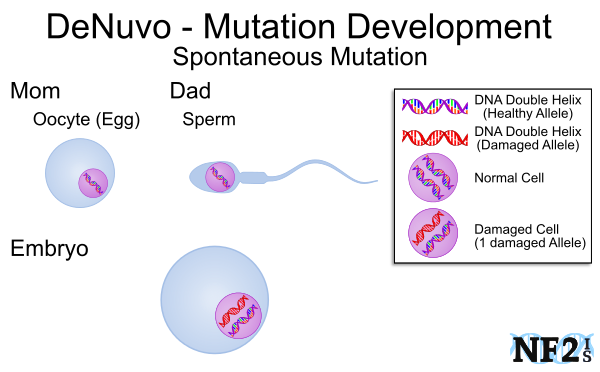 Frequently in Sporadic Mutations of NF2; Mosaicism occurs. People with a Mosaic mutation of a genetic condition; do not have the mutation in every cell in their body.

The following is the explanation for the Autosomal Dominance chart.

A few factors are responsible for the rate a parent has of having a child with NF2.

"The NF2 gene provides instructions for the production of a protein called MERLIN (moesin-ezrin-radixin-like protein), also known as Schwannomin. This protein is made in the nervous system, particularly in specialized cells called Schwann cells that wrap around and insulate nerves.

Merlin helps regulate several key signaling pathways that are important for controlling cell shape, cell growth, and the attachment of cells to one another (cell adhesion). This protein functions as a tumor suppressor, preventing cells from growing and dividing too fast or in an uncontrolled way.

The NF2 gene mutations that cause Neurofibromatosis Type 2 are classified as Germline, which means they are present in all of the body's cells. Most NF2 gene mutations result in an abnormally shortened version of the merlin protein. This short protein cannot perform its normal tumor suppressor function in cells. Research suggests that the loss of Merlin's function allows certain cells in the nervous system, especially Schwann cells, to multiply too frequently and form tumors.

More than four-hundred (400) mutations in the NF2 gene have been identified in people with the condition Neurofibromatosis Type 2 (NF2)." [Genetics Home Reference, NF2 gene - neurofibromin 2]

Loss or inactivation of the NF2 gene is often associated with the development of single (isolated) nervous system tumors, including meningiomas, ependymomas, and schwannomas. [Genetics Home Reference, NF2 gene - neurofibromin 2]

NF2 mutations and/or Merlin inactivation are also seen in other cancers including some mesothelioma, breast cancer, colorectal carcinoma, melanoma and glioblastoma.

Initially, the NF2 condition was believed to include two forms of NF2; Wishart and Gardner, understanding of genetics proved that NF2 is a lot more complicated than just two forms and is now understood to be up to 400 mutations of NF2 due to how the body reacts to the missing or mutated NF2 gene. Wishart was said to be the milder form than Gardner. Also, the same severity of NF2 within a family assumes for autosomal dominant inheritance and not as a Spontaneous mutation; this means if a child will have similar growth rate and issues as family, assuming the family with NF2 was not Mosaic and had NF2 in every cell in their body.

An individual, who has NF2 through spontaneous mutation, may be mosaic and might not have NF2 in their entire body depending on when in embryonic development the NF2 mutation occurred. These individuals might have more of a mild case then their children.

Some of the other variations and mutations include:

Sporadic VS, VS not a result of NF2, are very uncommon in young population, at or before adolescence.

Sporadic VS and NF2 VS are both benign, Spontaneous VS damage hearing in one ear, not both like NF2, but like NF2 also result in tinnitus, possible facial paralysis, and life-threatening neurological symptoms if not surgically managed.[Chen, 2014]

Individuals who are born with Ring Chromosome 22; may also develop NF2, as a result of damage to the 22nd chromosome.

Ring 22 is not a result of NF2; it is the result of a poor formation of the entire twenty-second Chromosome that has many issues but can result in NF2 as well as all the other issues associated with it.