While neurofibromatosis type 2 (NF2) results in eye issues as well as the potential growth of meningioma and ependymoma, the primary tumor growth type typical for the NF2 condition is a schwannoma. Schwannoma tumors are an overgrowth of schwann cells. Schwann cells are a part of nerves that aid in communication of either senses or impulse for movement of the body.

The hallmark tumors of the genetic condition of NF2 are schwannoma tumors alone CN8 and CN7. Individuals with NF2 may also grow schwannoma on other nerves, the growth of these masses can result in damage that would be either muscular or sensory in function.[1]

Overgrowth of schwann cell(s) inside of the nerve cells Myelin of a Nerve Cell, will result in fewer breaking points between Myelin for Node of Ranvier, each missing Node will mean less strength of Action Potential to carry sensory information along with a nerve. When a Schwann Cell overgrows and transitions to become a Schwannoma if it is threatening other nerves, is surgically removed, or radiosurgery is used to stop the tumor, the nerve the Schwann grew on will no longer function.

If a schwannoma grows slowly enough, the mass can reach a considerable size before it results in complete loss of the nerve. 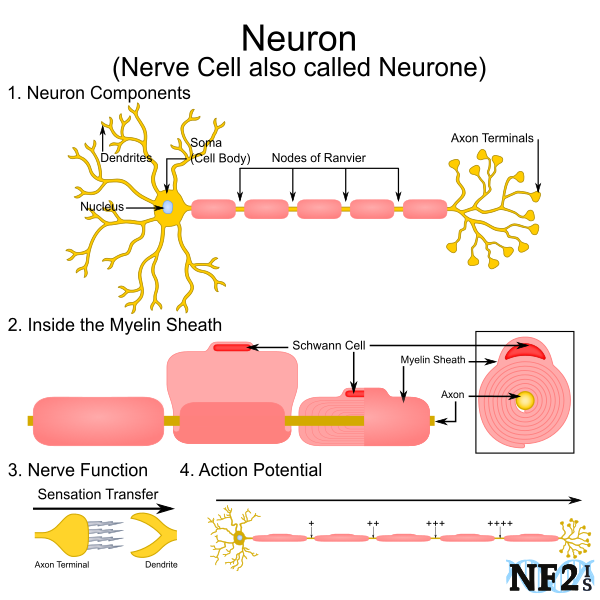 The purpose of the schwann cell on the neuron is to control impulse signals along the axons. Depending on what the purpose of the nerve would determine if the information was sensory or muscular. To understand why and how Schwann Cell Damage can occur, it is best to understand the parts of a nerve cell and action potential.